Distracted driving is the leading cause of car crashes in the United States, and one of the main distractions drivers deal with on the road is their cell phone. Whether they are sending a text, answering a call, scrolling through social media, or watching a video, they are putting other drivers at risk by taking their focus off of the road. 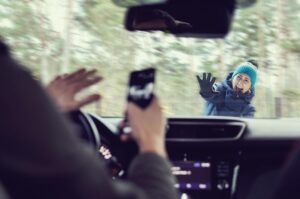 It’s no secret that distracted driving is dangerous, yet many drivers fail to put down their cell phones before getting behind the wheel. If you or a loved one has been injured as a result of someone using his cell phone while driving, speak to an car crash attorney as soon as possible following the crash.

There are a lot of misconceptions about using mobile phones while driving. Here’s the truth behind these common myths:

Myth: As long as the phone is hands-free, it’s safe.

Hands-free cell phone use is still distracting. In fact, it’s estimated that drivers miss up to 50% of what’s going on around them while they are talking on the phone—hands-free or not.

Myth: If you’re a good multi-tasker, it’s ok to use a cell phone behind the wheel.

Anytime you ask your brain to switch back and forth between two tasks—in this case, driving and using a cell phone—you slow down its reaction time. Therefore, if you are using a cell phone while driving, you won’t be able to react to brake lights or lane changes as quickly as you would if you weren’t using your phone.

Myth: Using your phone is fine if you’re stopped at a light or in traffic.

If you’re behind the wheel, it’s never a good time to use your phone. Drivers should be fully focused on their surroundings at all times, even when stopped at a red light or stuck in bumper to bumper traffic.

Drivers often think using the voice-to-text feature on their phone is safer than physically typing in a text message, but that’s simply not the case. If you use this feature, you usually will end up looking down to reread the text prior to sending it to ensure everything is spelled correctly. Doing so is just as dangerous as typing out the text in the first place, so this behavior should be avoided while driving.

If you or a loved one has been injured as a result of a distracted driver, you have a right to compensation for your injuries, property damage, lost wages, and pain and suffering. Trial Lawyers for Justice is comprised of experienced personal injury attorneys who can help you and your family recover the compensation you deserve. Contact us today or call 866-854-5529 for assistance.