Insurance laws vary by state. In some states, such as Illinois and Minnesota, drivers are required to have insurance policies that cover crashes caused by underinsured or uninsured motorists. However, other states such as Iowa and California do not require that drivers have this coverage added to their policies.

Uninsured motorist coverage will protect you in the event of an crash with an uninsured driver. Without this coverage, you may be forced to file a lawsuit against the at-fault party to recover compensation for any injuries or damages he caused in the crash. However, drivers who do not have car insurance rarely have any cash to pay you to settle the lawsuit. That’s why it’s always recommended that you add uninsured motorist coverage to your insurance policy even if the state you live in does not require you to do so.

Have you or a loved one been in a crash with an uninsured motorist? To discuss the limitations of your current insurance policy and your legal options, contact the Trial Lawyers for Justice right away. 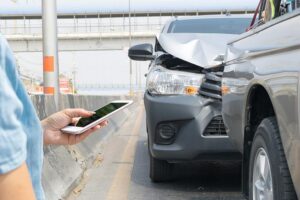 The process for filing an uninsured motorist claim is similar to a normal car crash insurance claim, with one exception: you are filing the claim against your own insurance company instead of against the at-fault driver’s company. You will still need to provide the necessary documentation, including a police report, statements from witnesses, medical records, and proof of expenses you have incurred as a result of the crash. If you and your insurance company cannot agree on a settlement, you cannot file a lawsuit against the company even though you would be able to so in a normal car crash claim. Instead, you will be forced to go to arbitration, where a neutral third party arbitrator will review the case and decide which side wins.

If you have been injured in a crash with an uninsured motorist, do not accept a settlement from your insurance company prior to speaking with an attorney. An insurance company may attempt to get you to agree to a very low offer in order to quickly resolve the case. But, it’s imperative you make sure the settlement you accept will cover all of your expenses related to the vehicle crash. An attorney can help you calculate the cost of medical expenses, lost wages, and property damage that occurred as a result of the crash.

If You’ve Been Injured By An Uninsured Motorist…

Recovering compensation after a crash involving an uninsured motorist can be difficult. If you have been injured by an uninsured motorist, speak to an experienced personal injury attorney at the Trial Lawyers for Justice as soon as possible following the crash. Call 866-854-5529 to schedule a free consultation today.